You are here: Home / Sensitivity / Introversion / Maybe To Be More Creative, Be An Introvert “Neither E = mc2 nor Paradise Lost was dashed off by a party animal.”

That is a quote by science journalist Winifred Gallagher, who notes: “The glory of the disposition that stops to consider stimuli rather than rushing to engage with them is its long association with intellectual and artistic achievement.”

Gallagher is quoted by author Susan Cain, who declares: “Without introverts, the world would be devoid of: the theory of gravity; the theory of relativity; W. B. Yeats’s “The Second Coming”; Chopin’s nocturnes; Proust’s In Search of Lost Time; Peter Pan…”

Cain adds that psychologist Carl Jung noted “There is no such thing as a pure extrovert or a pure introvert. Such a [person] would be in the lunatic asylum.”

“So if you’re an artistic American guy whose father wished you’d try out for the football team like your rough-and-tumble brothers, you’ll be a very different kind of introvert from, say, a Finnish businesswoman whose parents were lighthouse keepers. (Finland is a famously introverted nation.”

Quotes are from her book Quiet: The Power of Introverts in a World That Can’t Stop Talking.

Here is a video in which she talks about introversion:

Here are more quotes and resources on the intersection of the personality trait of introversion and creative expression.

What’s the main ingredient of creative success? Solitude. Here is a collection of over 30 introvert quotes on creativity, from actors and poets to artists.

“To be creative you must create a space for yourself where you can be undisturbed… separate from everyday concerns.” ~ John Cleese

“On their best days, writers all over the world are winning Pulitzers, all alone in their studios, with no one watching.” ~ Jeffrey Eugenides

“And here in my isolation I can grow stronger. Poetry seems to come of itself, without effort, and I need only let myself dream a little while painting to suggest it.” ~ Paul Gauguin

The Rise of the New Groupthink – NYTimes.com 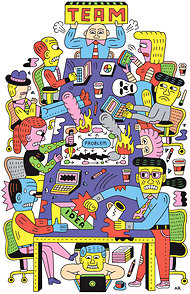 As the influential psychologist Hans Eysenck observed, introversion fosters creativity by “concentrating the mind on the tasks in hand, and preventing the dissipation of energy on social and sexual matters unrelated to work.”

In other words, a person sitting quietly under a tree in the backyard, while everyone else is clinking glasses on the patio, is more likely to have an apple land on his head. (Newton was one of the world’s great introverts: William Wordsworth described him as “A mind for ever/ Voyaging through strange seas of Thought, alone.”)

Lone geniuses are out. Collaboration is in.

But there’s a problem with this view. Research strongly suggests that people are more creative when they enjoy privacy and freedom from interruption. And the most spectacularly creative people in many fields are often introverted, according to studies by the psychologists Mihaly Csikszentmihalyi and Gregory Feist.

“It is not singular that, as the daughter of two persons of distinguished literary celebrity, I should very early in life have thought of writing. As a child I scribbled; and my favourite pastime, during the hours given me for recreation, was to ‘write stories’. Still I had a dearer pleasure than this, which was the formation of castles in the air—the indulging in waking dreams—the following up trains of thought, which had for their subject the formation of a succession of imaginary incidents.

My dreams were at once more fantastic and agreeable than my writings. In the latter I was a close imitator—rather doing as others had done, than putting down the suggestions of my own mind. What I wrote was intended at least for one other eye—my childhood’s companion and friend; but my dreams were all my own ; I accounted for them to nobody; they were my refuge when annoyed—my dearest pleasure when free.”

“In the era of Mary Shelley introversion as a path to creation is a more common phenomenon. Introverts are energized by their inner world, extraverts by the interaction with others. In the first preface to Frankenstein, Mary Shelley describes her inner fantasies as her greatest joy and difficult to convert into language, without the loss of their brilliance.”

USATODAY.com – Books about the power of alone time

Solitude: A Return to the Self by Anthony Storr

British psychiatrist Anthony Storr…Pointing to several figures throughout history–from Beethoven and Beatrix Potter to Ann Sexton–whose greatest achievements came about in moments of solitude, he argues that taking alone time can lead to an enhanced understanding of oneself, as well as bouts of superior creativity.

Six years of living alone on an island in the Pacific Northwest showed freelance writer Lionel Fisher both the bliss and treachery of extensive solitude. Fisher shares wisdom from his own experience and those of others, exploring the perils of alienation and the ways in which extensive alone time can bring happiness. “What is tragic, and so wasteful of the sanctity of life,” he writes on his website, “is that we seek our happiness, our fulfillment, our answers, our very identity in others when first we must find it in ourselves.”

A couple of my related articles and resource lists:

Oscar-winning director Ang Lee represents many creative people with a constellation of traits associated with introversion.

Creative Thinking and Being Introverted or Highly Sensitive
A number of writers and researchers associate the personality traits of high sensitivity and introversion with creativity and creative thinking.

Programs for Introverts and Highly Sensitive People – Programs to encourage, inspire, and equip introverted and highly sensitive people, plus links to other resource pages for books, articles and more sites.

Resources for Introverts and Highly Sensitive People – Introversion and high sensitivity are different, but they can also overlap and interact, and many of us experience both personality traits to some degree, perhaps along with shyness.

This page includes books, sites and articles that explore these qualities, their impact on our creative lives, and how we can thrive using the positive aspects.