You are here: Home / addiction / Addiction and Creative People Addictive behavior can interfere with our creative life

“I tried to drown my sorrows, but the bastards learned how to swim, and now I am overwhelmed by this decent and good feeling.” – Frida Kahlo

During her life artist Frida Kahlo “underwent a total of 35 surgeries, including bone grafts, and became addicted to pain killers and alcohol.”

From article: The Art and Suffering of Frida Kahlo by Joan Fimbel DiGiovanni, Ph.D.

This section of my book is not just about drug use and abuse – there are many forms of self-limiting addictive behavior that can interfere with realizing our creative and other talents.

But substance use is one area to start with.

A number of people with exceptional abilities have used drugs, alcohol and other substances – perhaps as self-medication to ease the pain and overwhelm of their sensitivity, or perhaps as a way to enhance thinking and creativity.

I know something about that from personal experience, having experienced a three year cocaine addiction, successfully treated with cognitive therapy more than 25 years ago.

Many creative people have had addiction or abuse problems

Beethoven reportedly drank wine about as often as he wrote music, and was an alcoholic or at least a problem-drinker.

At least five U.S. writers who won the Nobel Prize for Literature have been considered alcoholics.

From my article: Gifted, Talented, Addicted.

In his richly stimulating article on the philosophy of addiction Unhooked Thinking, William Pryor notes, “I was once a heroin addict. I am now a writer, film producer and entrepreneur, fascinated by the very nature of addiction.”

He thinks the “endemic something in the human condition that leads so many to become addicts.. has been called weltschmertz, world-weariness, melancholy and in India, bireh or longing.

“It is the pain of being human, no more, no less, the pain of having the chaotic self-awareness of human consciousness chained by its attachments to the mundane.”

William Pryor is Director of Unhooked Thinking, and author of the book Survival of the Coolest: A Darwin’s Death Defying Journey into the Interior of Addiction.

Addiction psychologist Marc F. Kern, Ph.D., notes that altering one’s state of consciousness is normal and that a destructive habit or addiction is “mostly an unconscious strategy – which you started to develop at a naive, much earlier stage of life – to enjoy the feelings it brought on or to help cope with uncomfortable emotions or feelings. It is simply an adaptation that has gone awry.”

See his Alternatives site for information on managing behavioral problems and addictions without using a 12-step model (such as AA). Actor Robert Downey Jr. has reportedly been clean and sober for a long time, but admits to a long history of drug abuse. “For years I took pride in being resilient,” he says.

“But that turned into this guy who can get hit by a brickbat every morning and still look kind of cute.

“I mean, there’s ‘ready to be ready,’ and then there’s waking up in the morning feeling like you’ve been hit in the back with a sledgehammer.”

He is “very very very high maintenance,” he admits. “Even without being the inventor of any of my own impediments from this day forward, it’s still tough, it’s still chaotic.”

Another talented actor, Michelle Rodriguez (of the TV series “Lost,” the movie “Avatar” and others) was released from a Hawaii jail after being found guilty of drunken driving.

She said she was thankful for her arrest “because of the fact that I didn’t acknowledge my own behavior and how sporadic it was until all hell broke loose in my life.”

That is one of the most insidious aspects of drug and alcohol abuse – losing our capacity to be objective about the destructive results, both on others and ourselves, until it reaches extreme levels.

Turner Classic Movies ran a biography on Bette Davis, arguably one of the most gifted and expressive actors, but with a private life that was chaotic, including a marriage to an alcoholic, and being emotionally abusive toward her daughter.

Davis reportedly suffered ill health due to alcohol and cigarette abuse. In many of her films she smoked, as well as in real life; she often lit up on talk shows, and discounted it saying, “If I did not smoke a cigarette, people would not know who I was.”

In his article Myth of an ‘Addict Gene’ (on the huge resource site AddictionInfo.org), Jeffrey Helm writes about some of the issues involved in testing for a supposed genetic vulnerability to addiction.

Helm notes, “Dr. Tom Koch, a bioethicist and professor, is concerned that if a genetic test for addiction were developed, children with genetic risk factors for addiction would be weeded out…”

Helm asks, “So is the world better off without people with a biological susceptibility towards becoming addicted? If the answer is yes, Dr. Koch points out that people like Dylan Thomas, William S Burroughs, and Miles Davis might not have existed and brought their art and music into the world. All were artists who struggled with substance abuse.” 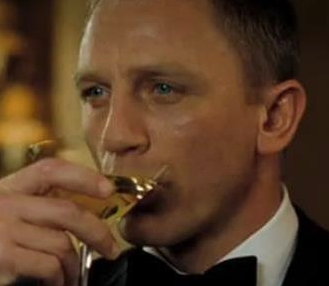 When he heard that he was chosen to be the new Bond, actor Daniel Craig says,”I was shopping, and I dropped what I was carrying. I went straight to the alcohol section and got myself a bottle of vodka and a bottle of vermouth and went back and made myself a Martini – or two.” [The Sunday Herald, Oct. 16, 2005]

Acclaimed for his toned look as the new James Bond, Craig has commented about his training regime: “I’m not obsessive about fitness. I work out three or four times a week but I take the weekends off and drink as much Guinness as I can get down my neck.” [mi6.co.uk]

But that love of knocking down a few – or more – pints he blames for his nude scene in the 2000 movie Some Voices: “The scene was written as me running down the road stripped to the waist covered in tomato juice. But then I got drunk at Simon’s and said, ‘I’ll do it naked!’ The lesson is never get drunk with directors.” [imdb.com]

Many people enjoy drinking to varying degrees, at times. There are even some health benefits of red wine, for example, that are increasingly supported by research.

But as I note in my article Gifted, Talented, Addicted, the idea of using drugs and alcohol as a way to enhance thinking and creativity can be misguided.

For example, Jane Piirto, Ph.D., Director of Talent Development Education at Ashland University, notes in her article “The Creative Process in Poets” that the “altered mental state brought about by substances has been thought to enhance creativity – to a certain extent.”

But, she adds, “The danger of turning from creative messenger to addicted body is great, and many writers have succumbed, especially to the siren song of alcohol.”

“Always be drunk. That is all: it is the question. You want to stop Time crushing your shoulders, bending you double, so get drunk – militantly. How? Use wine, poetry, or virtue, use your imagination. Just get drunk.”

One of a number of books by Jane Piirto: Understanding Creativity.

The above is excerpted from the “Addiction” section of my book “Developing Multiple Talents” – see reviews and more info: About the book. [On being sober] – I’ll tell you right now I still dance on tabletops, I still have such amazing times, and I connect with people. I get to be an actress.

I’m back in college at 36 years old, attending Suffolk University, and pursuing a bachelor’s degree in sociology and hope to work with addicts.

It’s something I always wanted to do and I didn’t get to do because I was on a different path.

I’ll be honest, I got sober at first for my family.I got to a point where I felt so sick about myself. I was depressed. I didn’t like myself.

But I loved my family.I remember my brother telling me he didn’t want me to be around my niece…because he didn’t trust me.

I’m a really good auntie today, but you know what? He was right.

I am a good person, but when I did drugs and drank I didn’t make good decisions. I’m sure some of you can relate to that, but all it takes is one bad decision.

[On being an opiate addict] – I’m a real badass and tough girl, that was part of my thing. It was the hardest thing in the world to ask for help, but it was the most powerful thing I’ve done.

[Addressing 8,000 middle and high school students at the first New Hampshire Youth Summit on Opioid Awareness] – I got sober for my family, “but today, I’m sober for me, and I’m sober for you.

[Quotes are from her imdb profile.]

Note: AA (Alcoholics Anonymous) & 12-Step programs are NOT the only option for treatment, and probably not the best fit for complex and creative people.

See more info at one resource I know about, appropriately named Alternatives Treatment – “an addiction treatment and alcohol abuse program that focuses on giving clients the option to choose moderation instead of complete abstinence.”

And, as I mentioned above, I recovered from a cocaine addiction using cognitive therapy – another effective approach.